I Think I Hate My Wife and I Don’t Like Being Married to Her – What Should I Do? For many, particularly for a lot of those who dream of getting married, they conjure up ideas of delicious sessions of…

But thousands of other people, who have been there, have done that, they’ve got the tee-shirt; they will tell you that it is not the happy ending.

For thousands of men, the honeymoon was the last time they could remember any romantic bliss!

For many with a lot of years of experience in marriage, they will tell you that marriage requires a continual effort to keep the boat afloat.

It doesn’t just pan out well on its own.

It requires hard work, team spirit from both parties, plenty of humor, and other positive things to keep it going.

Sometimes along the way, one person will feel wronged by their partner.

And being human, and different, it will depend on whether we will just ignore everything and let it hopefully go away on its own or we confront the problem in an angry outburst, for thousands, they seek solace in the arms of someone else.

If problems aren’t dealt with, they can lie there and become a toxic, festering sore

Many wives will feel they relate to this scenario.

They have noticed that their husbands have changed their behavior towards them.

They no longer communicate with them – the affection is gone, and they notice that their men are avoiding them more than they want!

Things that lead to this resentment from a partner can arise from a whole host of problems.

There are many, which can be financial problems, no communication, no intimacy, and unfaithfulness.

All relationships have ups and downs, where you feel your partner has let you down.

So we will look today at 10 top reasons why husbands start to resent their wives.

Some men become resentful; they start to hate their wives, longing for escape.

Are you such a husband? 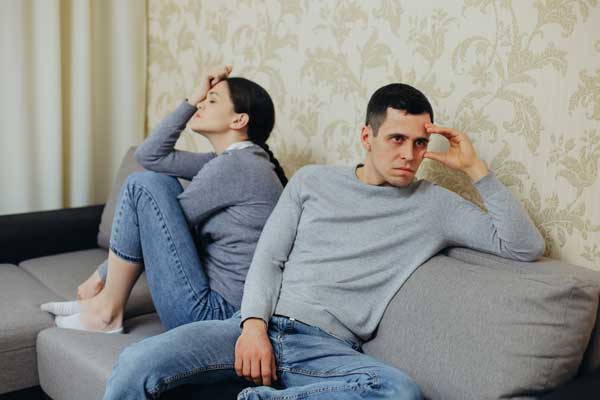 Having a lazy spouse in the marriage can be hugely stressful and infuriating.

You expected her to help around the house, to do errands and other work.

You work all day.

When you get home, the children are running around, unorganized, no dinner is prepared, and ‘wifey’ is playing with her phone on the couch.

Worst of all, she doesn’t even try and go out to work.

At home, she wants to act like the Queen Bee.

A lazy wife can cause a rift in the relationship and cause a huge rift in communication.

2) She spends her life on her phone

This is becoming a huge problem in marriages.

The cellphone has become the new ‘bf’ or new ‘gf’ in the relationship.

It gets gently put on the table when eating.

The moment it rings and demands attention, it gets it!

If it falls, it gets nursed and lovingly “fixed” because its owner cannot do without it!

It knows about receiving all kinds of intimate chats and texting – it is a lifeline.

So you can understand why it has become a problem in a marriage.

When a man comes home from a day at work and his wife is on her phone, not paying attention, and ignoring the kids, you can understand, too, how lonely it makes a person feel.

He wants you to create cell-free times for him.

Marriage counselors typically hear men complain that they are not getting enough sex in the marriage.

That makes them feel resentful.

There are many reasons, of course, why this might be so; she might have a low sex drive.

But when the matter is not even communicated, a guy feels rejected, and resentment builds up.

If a man does want sex and does not get it in the marriage, it can lead to much anger, even depression.

One big marriage problem is when a partner talks down to the other.

And a man hates this.

It makes him feel inadequate and resentful.

He resents the fact that because his wife thinks she is ‘Mom of the Year’ with the kids, it also extends to him!

A man finds a woman who treats him like a kid unsexy.

And yet, it is not an uncommon scenario in a marriage.

6) She never appreciates anything that he does to improve things

We all know in marriage how regular doses of praises go so far as to keep it happy and balanced.

When a wife doesn’t appreciate her husband’s efforts, it injures him.

She refuses to appreciate the things he does well, whether it’s his job, work, something good about his character, a hobby, or whatever.

A man always feels part of his identity is in his actions.

So when his wife doesn’t find value in him, his ego is bruised.

She finds reasons that his good news isn’t good news.

He gets a promotion, and she downplays it.

Or he organizes a wonderful holiday in the summer sun, and she will say something like, “Are you sure we should go?”

7) She withholds sex as punishment

That’s what the author of Is That All He Thinks About, Marla Taviano, says.

And when a woman gets angry with her husband or wants something from him, she will often withhold sex or use it as a bargaining chip.

That’s what is known as emotional abuse.

This can alienate a guy.

When sex is withheld, it makes a guy feel less loved. In the end, he gives less love in return.

It is OK to say you don’t want sex, but telling your husband you won’t have sex with him because he has done something wrong can be considered abusive.

The reasons for withholding sex will depend on each person.

Often it results from past abuse or trauma; sometimes, it is a well-thought-out plan.

8) She wants to change her husband to her standards

Anne Ziff, Marrying Well’s author, says, “Every person can change, but it’s better to focus on our own changes, rather than our spouse’s behaviors.”

But some wives create relationships where husbands just can’t be themselves anymore.

“I will change him” are words that women have said worldwide.

When you meet the right person and love someone, don’t you generally accept them for who they are, faults and all?

Unfortunately, trying to change her man can be dangerous for a woman because it can backfire and disappoint her, putting the relationship on the rocks.

When a woman tries to change a guy, she nags him, which causes him to hate his wife.

9) She makes important decisions without your input

You’ve had heaps and heaps of disagreements because she makes important decisions without even consulting you.

She is trying to wield power.

But the thing is, if you want a harmonious relationship, you have to balance the power.

But she is the one who has started calling the shots.

It could be dynamic in some relationships, which is OK if you are both happy.

But maybe you have noticed that your wife is doing all the decision-making in your relationship, from the smallest to the big.

It is leaving you feeling depleted and resentful.

10) She gives you no space, not even to be the kind of parent you want to be to your kids

Some parenting styles, like what dad brings to the relationship and the kids, such as rough-and-tumble play, offer children special bonds and unique developmental benefits.

Men get resentful when they see their children growing up with obvious gaps in their independence and competency.

And sometimes, when a woman doesn’t trust her husband to do the parenting her way, she is sending a message to him that his methods are wrong and only hers are right.

It’s no wonder some guys resent their wives because things are no longer the same!

If you hate your wife but want still want to fix the marriage, how can you start?

Why does a man lose interest in his wife?

It’s when the relationship becomes stagnant, and you are both become boring and comfortable with each other.

Is there a particularly hard year of marriage to adjust to?

According to relationship therapist Aimee Hartstein, a licensed Clinical Social Worker, she says the first year is the hardest, even if you have lived together before.

Even if you have been together for a few years, getting married and starting married life can always be a bit tricky; it takes adjusting.

What is the biggest problem that arises between married couples?

Sometimes the intimacy just starts to disappear. It usually is one of the most common causes of marital problems.

When you went into marriage, you probably knew that there would be times when you wouldn’t always feel so romantic towards each other.

On your wedding day, you never believed that the romantic feelings you felt for your wife would start to die or that they would die completely.

You would have found it hard to believe that in a few years, you would have already started to resent your wife to the point of hating her at times.

You have even thought of leaving her.

But you have also thought of the kids and of trying to work it out for their sake.

You have a couple of options.

You can insist you and your wife go to counseling appointments – you be the one to set them up.

If she refuses, you could show her that you are serious about getting things right and tell her you to want this before dishing out divorce papers.

You are no longer prepared to stay in a loveless marriage with someone whom you have grown to resent so much.

You could also insist on having an hour each week where you and your wife sit down and have private and uninterrupted conversations to try and rebuild the relationship.

Go out again and see if you can’t have great fun again like you used to.